In 2017 Spitfire Company celebrated their 10th anniversary and the project Konec --- člověka / Doba z druhé ruky shall be a culmination of the decade’s accomplishments. Current as well as former members of the company will meet on stage at the sound of music written by composer and conductor Jan Kučera. Masks are designed by the sculptor Paulina Skavova, sound design will be created by Martin Tvrdý.

Spitfire Company is one of the most progressive companies in the Czech Republic, with a number of Czech and international awards to their credit, among them the Theatre Journal Award (multiple times), the Herald Angel Award, two nominations for Total Theatre Award, the DNA Award, Skupa’s Pilsen Award, a nomination for the Theatre Critics Award and more.

The very first Czech theatre adaptation of texts that have become part of the European cultural tradition and have garnered the Nobel Prize for literature.

A theatre symphony crafted from the margins and creases of the present, recent past and the future supposedly under threat. There is no major narrative; instead, there are countless intimate micronarratives that, in the end, make the history of our everydayness. What is our destiny?

The frustration of people on the margin of society can hardly be ignored. Cast out to the brink of society, they welcome new dogmas that promise easy reinstatement of order, certainty and security of the past times. This is how either a revolution or a totality starts. Svetlana Alexievich is always there with the people, for the people, writing about the people. Her books are thus apolitical, relentlessly and unflinchingly reflecting the true nature of current society. 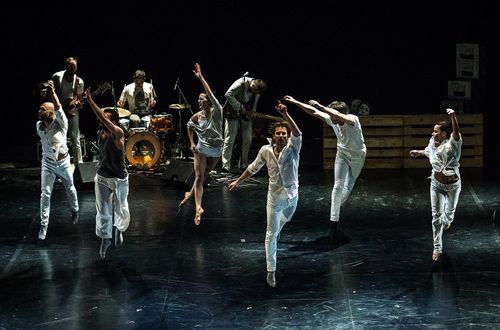